At one time, the idea of an average person owning a laser of any type surely seemed far-fetched, but after the advent of the first laser pointer, these futuristic objects became popular, and now they are everywhere. They are used by executives looking for an efficient way to highlight areas of a professional presentation and amateur astronomers who want to point out their favorite constellations. No matter what the task at hand, there is an affordable laser pointer that can do the job. 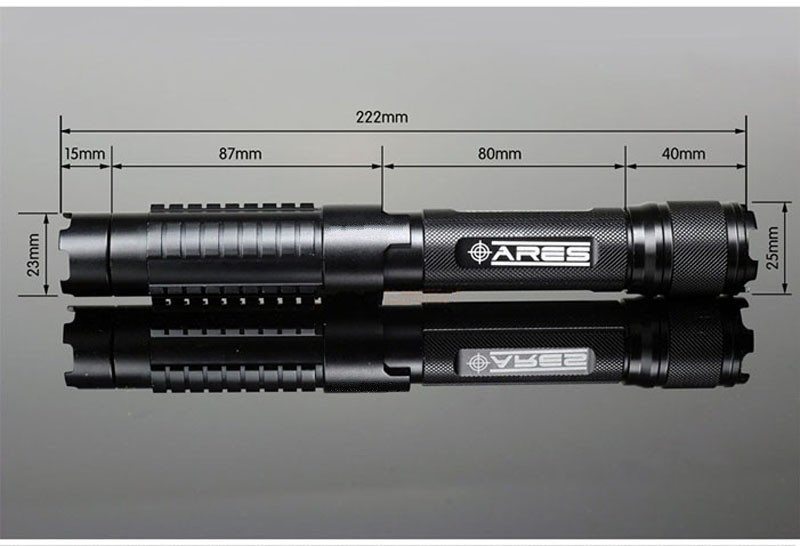 Since the boom in laser pointer popularity in the 1990s, there have been countless makes and models of laser pointers put on the market. Each different laser pointer has its own features that are suitable for different situations and needs, including the power of the laser, the size of the pointer, and of course, the cost of the pointer. There are companies offering high-power, military-quality lasers as well as simple lasers that operate on the lowest power, which are better suited for short-distance pointing.

The power of the laser in a laser pointer is the most important measure of how the laser performs and the type of tasks for which it is suitable. Laser pointer power is measured in milliwatts, which is denoted with "mW" in laser pointer descriptions. The mW rating measures the output of power from the laser. The following chart lays out what the different power ranges on laser pointers mean for their use.

The typical laser pointer that is used for presentations is under the 5mW limit. These types of laser pointers are by far the safest and most common. A laser beam above 100mW can cause severe optical damage, and 300mW laser pointers can cause instant blindness if shined directly into someone's eye. Class III beams, which have up to 500mW of power, should only be used by professionals or those extremely confident and capable of such a major responsibility.

When choosing a laser pointer, it is also important to decide on the right size. Some people choose to carry keychain laser pointers that are easily portable and can be kept at the ready. For instance, some hikers or outdoor enthusiasts keep this type of burning laser pointer on their person or in an emergency kit. This way, in the event they become lost, they can use the laser to signal people at a great distance who may be searching for them. Pen laser pointers are popular for use in offices since they can easily be stored with actual pens and slip easily into a pocket. However, their slightly bigger size makes them more comfortable to hold during a presentation. Finally, the most powerful laser pointers that are portable and available for the average consumer are the size of a large flashlight and are known as handheld laser pointers. These are the higher power lasers that are legally not for use out of doors. The average person would not want to carry around this size of laser pointer, but some laser enthusiasts may not have an issue with the extra bulk. The size of the laser pointer may also affect the type of batteries that are used, so be sure to check that specification before buying a laser pointer.

The price of a laser pointer depends most heavily on the power of the laser. In general, the higher the wattage, the higher the cost. There are many compact red laser pointers available for very low prices with some costing less than $10. These can be perfectly acceptable for presentations and light workloads. On the other end of the spectrum are large and powerful handheld laser pointers that can cost hundreds of dollars and must only be used while wearing safety goggles. The vast majority of consumers do not need to spend more than $100 on a high-quality laser pointer that lasts for many years.

The first laser pointers were only available in the color red, but as technology improved and manufacturers were able to safely recreate other wavelengths in laser pointers, more colors became available. Each different colored laser pointer is most appropriate for different uses.

Increasingly, green laser pointers have become more popular, though they are generally more expensive than their red-colored counterparts, with many models costing upwards of $100 in 2012. Green lasers are simply more powerful than red lasers. They are much brighter and can be seen from much greater distances, even while operating under 5mW. Of course, this also means that green lasers are potentially more dangerous than red lasers. When operating this type of laser, it is important not to point it into anyone's eyes or to point it up in the sky towards any airplanes, which is actually a federal offense in the United States.

Depending on the power of a laser pointer, these devices can be extremely dangerous causing damage to eyesight, burns on skin, and even starting fires. This is why it is imperative that anyone operating any type of laser exercise proper precautions. The more powerful Class III lasers should only be operated when wearing proper protective gear, and no laser of any strength should be pointed at a person's eyes. As mentioned earlier, a laser beam above 100mW can cause severe optical damage, and 300mW laser pointers can cause instant blindness if shined directly into someone's eye. Even a 30mW beam can cause bad damage to eyes, though that damage is not usually permanent and can heal in time. Reviewing the manufacturer's safety precautions for an individual item, as well as the laws regarding lasers in the local municipality, is an important part of proper laser pointer operation.

Laser pointers can be a useful tool for professional presentations or a fun toy for entertaining the family pet. Of course, not all laser pointers are suitable as toys, and in fact, high power laser pointer beams can be quite dangerous. It is important that individuals carefully evaluate their needs and choose a laser pointer that is safe and appropriate for its intended application. For those who need a laser to perform substantial work, there are also many powerful laser pointers that, when operated properly, can be truly spectacular. There is a variety of companies that produce laser pointers, and there are several makes and models within each company. As a safety precaution, it is best to find a laser that is capable of a beam strength you need, but not overly strong. Laser pointers should also always be kept away from children, who may be intrigued by the bright red, green, or blue light shining from the end of the pointer. Depending on any individual's needs and budget, there is a laser out there that fits perfectly.

There currently are 59 guests and 25 members online.